Auroville, Part I: The Promise of a False Prophet 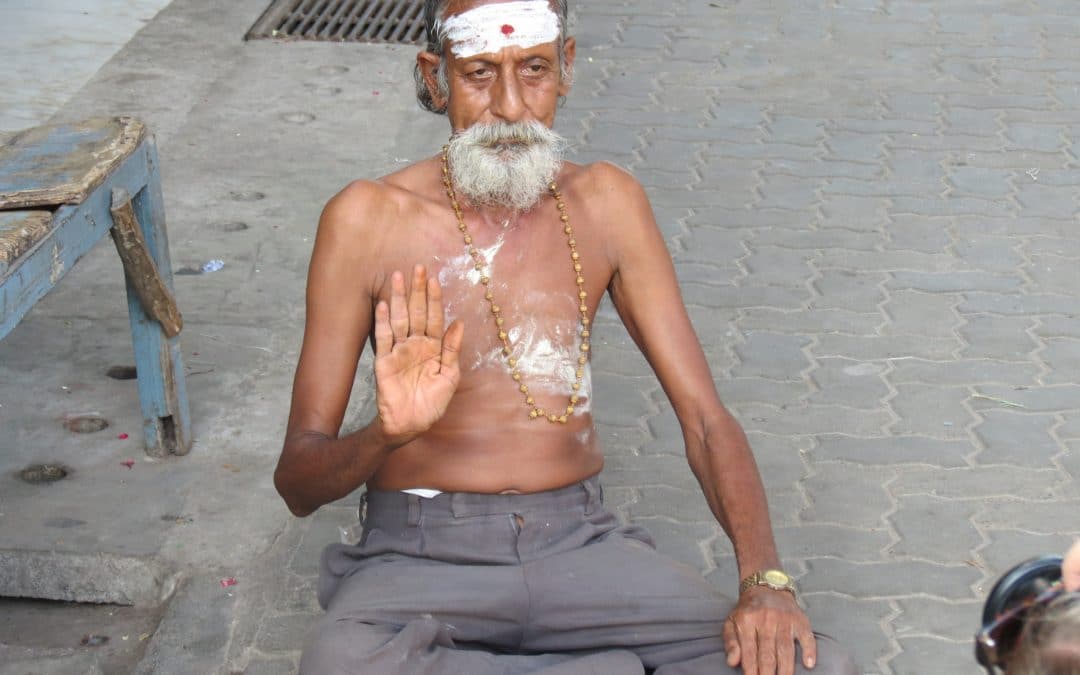 It all started two years ago.
I was at home, planted firmly on the couch and stuck in the endless news feed scroll. My brain drifted aimlessly, on autopilot, as the glare from my dumb-me-down phone illuminated my wide, dry, unblinking eyes.
It was just another day wasting valuable time in the book-of-faces mind suck. I likely could have been doing any number of other, more productive things, but you know the drill.
Then, something caught my eye. It was one of those flashy videos promising something amazing which almost always and without fail ends up being nothing more than a bag of empty promises tumbling end-over-end across the barren wasteland of my brain’s social media lobe.
But no. This one was interesting. My finger froze on the screen and, with aching slowness, I brought the video to the middle of my feed. It played.
Although the picture quality was poor, the production was great. It said “Auroville is a town free of government, religion and money” in a big capitalized font as a flame surrounded by people shot into the sky. Other pleasing statements and images faded in-and-out until finally the picture of a city in the shape of a galaxy appeared on the screen.

Words like “Utopia” and “Experimental City” came-and-went. I was immediately entranced. My mouth hung agape, beckoning the nearest fly with the promise of a severely dry mouth and Cheetos breath.
New age music played as the word “Auroville” appeared on the screen. It means “The City of Dawn in French,” the narrator said in a voice that was no more than a hushed whisper, as though I was the one-and-only lucky recipient of this great big secret… on Facebook… in an ad seen by thousands.
My first clue should have been the messenger. It was one of those Facebook personalities who promise rose water will make your bunions disappear or that a basil leaf dipped in lemon juice will raise your cosmic vibration to a level of pure enlightenment. You know the type. They have millions of followers who proceed, zombie-like, from one ridiculous post to the next. I believe this one’s last name was closely related to that of a certain predatory animal who roams in packs – an irony Alanis Morrisette would be proud of.

Don’t get me wrong, I’m not one to trash talk metaphysical mumbo jumbo – in fact, I believe a lot of things my more logical, left-brained, scientific friends openly laugh at me for believing. But there were warning signs here. I should have paid closer attention to the messenger, but I was too enraptured by the message. I was sucked in.
The video was flawless in its execution and did the trick beautifully. I even went and, like a good little lemming, liked the guy’s page. I certainly earned my Social Media Automaton Merit Badge that day.
But the thing is, his video appealed to the altruist in me. You see, I’m one of these hopelessly idealistic Millennials (on the older end, at 35) who finds our greed-filled, capitalistic every-man-or-woman-for-themselves society to be an utter disappointment.
For lack of a better term, I think free market capitalism is not the answer, even as I myself wallow in its excesses and enjoy a life filled with all my precious “things” and “privileges.”

Still, I’ve always thought that there must be a better way. As an empathetic human being, I genuinely want to see everyone succeed. I really am a smarmy, give-me-a-break type of person who loves everybody. Seriously. Sue me.
The fact is, we live in a world where the gap between rich and poor is wider than the Grand Canyon; where the thought of providing healthcare-for-all or helping the disadvantaged makes people with more money than God clutch their pearls and go running for the hills.
Surely, this poor excuse for a global economy we’re saddled with isn’t all there is. Was this Auroville place the answer? After chomping down hard on the digital hook, I immediately set about doing my research.
A few hours later I was completely sold. I had been reeled in.
Auroville is a planned experimental town located in the State of Tamil Nadu in southeast India. It is set close to the Coromandel Coast, 10 kilometers north of the city of Pondicherry and 150 kilometers south of Chennai, one of the largest cities in India.
The concept of Auroville originated from the writings of one of India’s great yogi philosophers, Sri Aurobindo. But it was his French-born collaborator Mirra Alfassa, otherwise known as The Mother, who oversaw its birth into actuality.
As stated by The Mother in 1965:
Auroville wants to be a universal town where men and women of all countries are able to live in peace and progressive harmony, above all creeds, all politics and all nationalities. The purpose of Auroville is to realize human unity.
After the public statement, the concept of Auroville was put before the General Assembly of UNESCO by the government of India. Within two years, in 1968, youth from 124 countries and all the Indian States came together to inaugurate the town.
Auroville’s charter reads as follows:

WOW! The inner metaphysicist in me was having one epiphany after another. Divine consciousness? Bridge between past and future? Embodiment of Human Unity? Were these people serious?
Further research revealed that Auroville’s chosen site was a severely eroded plateau on which there was nothing more than red dust and small insects. To-date, over 2 million trees have been planted on the plateau, turning nearly ten square kilometers of a barren wasteland into a lush, verdant landscape.
As I dug deeper, my interest only grew. With a polished website filled with fantastic imagery, Auroville billed itself as a one-of-a-kind society where enlightened thoughts flourished and the good work of humanity is being done. From education to the arts to culture and commercial activities, the information I found on Auroville all seemed to point in one idealistic, profound direction.
At the center of it all, a giant golden globe stood as a monument to Auroville’s ideal: The Matrimindir. The pictures of it were truly awe-inspiring. As a piece of architecture, it was utterly impressive. As a symbol of what-could-be, it was a structure of hope. 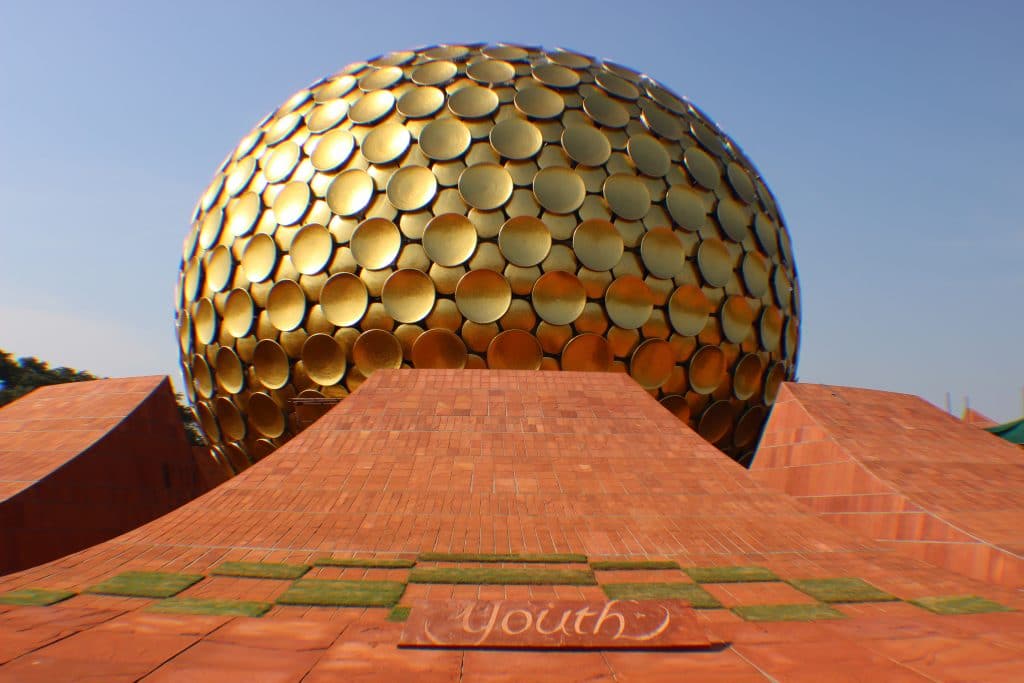 Before I knew it, the night had dragged on into the morning. My attention span had shifted from my phone to my computer… hours had passed and I was exhausted. I went to bed and normal life resumed. While I continued with life-as-it-is, the gleaming promise of Auroville – truly, a shining city on a hill – always remained in the back of my mind.
Fast-forward two years and suddenly I found myself embarking on an adventure of a lifetime. I will spare you the details, as those will be fleshed out in another post, just know it involves four months of travel through multiple countries in Southeast Asia.
As though setting out on such a journey wasn’t enough of a cultural shell shock, I decided to step it up a notch.
One afternoon, as I sat looking at a map of Malaysia – the first stop on my trip – my eyes wandered a bit to the northwest, where southern India stood out like a sore oh-my-God-is-that-Auroville-right-there thumb. The twinkle in my eye grew into a starburst.
While I had long ago ditched the false prophet that lured me into the promise of Auroville – indeed, growing tired of being told that rubbing mint leaves under my armpits would help me lose twenty pounds in two hours – I never forgot the one bit of useful information he had provided me on that long-ago night: Auroville. Thanks, new-agey Facebook false prophet peddling in nonsense. You did at least one good deed.
Before the clock struck twelve, I had a plane ticket purchased and sent a request for accommodations. Within two months, I would be in Auroville.
My goodness, was this real? All I could do was imagine the profound transformations that were sure to take place in my life. I would visit Auroville and become a new man! Enlightened! Aware! Ready to take on our elite paymasters and help change our world for the better!
Of course, the first thing I did was tell just about everyone, their brother, and their dog that I was going to be visiting this amazing city where there was no politics, religion or money.
Then, the place I emailed for accommodations came back with a bill. They wanted me to pay money.
Say what???
As I sat, reading the email, quizzically wondering if they were playing some kind of joke on me, a follow-up email popped in with a link to an online payment form.
It wasn’t a joke.
Although the veneer of my blind hope suddenly displayed a huge crack, I figured there had to be a reason for this. Surely, I would get there, all would be explained and everything would make perfect sense.
So, I paid the fee and waited patiently as the day approached.
On February 17, 2017, I landed in Chennai, India to begin my journey south to Auroville. Now was the time to discover if utopia was real.
Would Auroville be everything that I had been promised by the false prophet? Or was it nothing more than a basil leaf dipped in lemon juice? Join me in Part II of this series to find out.