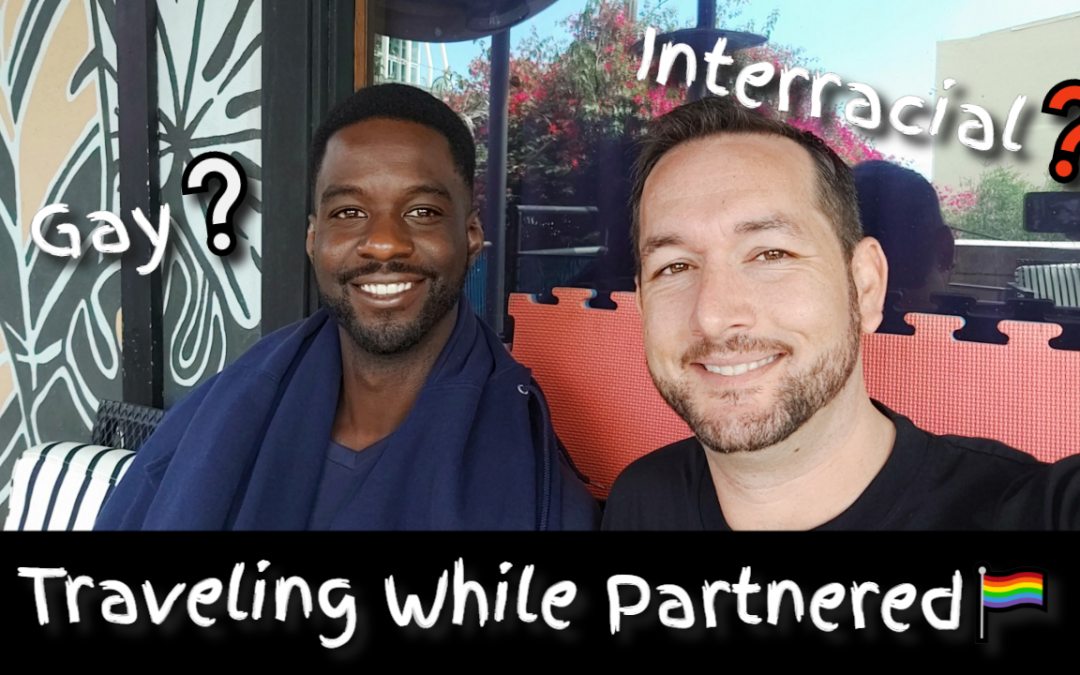 It is a question we get asked a lot: “What is it like traveling the world as a gay/interracial couple?” So, we felt now was as good a time as any to write a blog about it! Certainly, we are not the only interracial or gay couples traveling. If we can offer some insight on how it is, we should. Now, before you worry, traveling as a gay, interracial couple has not presented us with constant problems as we hop around the globe, but that doesn’t mean we (Brandon) have not experienced racism while traveling.

Traveling as an Interracial Couple

Let’s start with the one that disproportionately impacts one of us more than the other. And it is also the one that is most obvious: We are an interracial couple. While Brandon and I are not what one may stereotypically consider “flamboyant” or “obvious” about our sexuality, to most people we are just two dudes traveling. So before anyone knows we are gay they can obviously tell that one of us is white and one of us is black. Usually, this is where any problems arise.

People are surprised when we tell them that Brandon has been on the receiving end of a lot of racism around the world. We will be the first to tell you: We do not live in a post-racial world. While we wish that was a surprise to no one, we know many still don’t get it.

Our first brush with racism abroad came in Argentina in May of 2018. Brandon and my mom were walking down a street in Buenos Aires in broad daylight when two men across the street yelled the N-word at Brandon. No words had been exchanged prior to that; it was a completely random event. Bless my mom’s heart, she was ready to cross the street in all 4 feet 11 inches of her glory and take on those two guys. Fortunately, Brandon is used to this sort of thing and they just continued on. Unfortunately, this kind of unprovoked racist incident was not the only one.

Our next brush with shitty racist attitudes was quite a shock because it seemed to come from an entire country. In September of 2018, we flew to Eastern Europe to begin our big Eastern European adventure. We started in Sofia, Bulgaria, and we were scheduled to spend a month. Upon arriving, the first thing we noticed was that the general ‘vibe’ of the country as very depressed. Bulgaria is not a rich country and struggles with corruption and you could tell from the attitude of its people. Yes, this is a generalization. We actually made a friend in Bulgaria, but if we were to give it a weight, we would definitely weight it 75/25 in favor of people giving Brandon the stank eye.

There was an undercurrent of malice from just about everyone towards Brandon. We would walk the streets and the way people stared and scowled at him was quite apparent. Many times people would make a wide berth as we walked by. This all culminated when someone called him the N-word in a bathroom in the seaside resort area of Sunny Beach. There is hope for humanity, however, as three Norwegian guys came to his defense and we ended up hanging with them all night and are friends still to this day.

Sadly, this was not an isolated instance in Eastern Europe. In Bosnia/Herzegovina, a drunk Bosnian got in Brandon’s face at a bus station. He was very loud and thought Brandon was French. We couldn’t figure out if he was mad because Brandon was black or because he was (not) French. Thankfully, a couple people, including the barista at the coffee counter at the bus station, yelled at him and corralled him outside while Brandon stood calm under his spittle assault. You have to give it to my husband. He withstands these things stoically and with calm pride. He doesn’t fight. While he may use his voice very sternly, which he is good at, he has never once raised a hand or returned anyone’s aggressive behavior.

Still, one cannot judge all Eastern European countries in the same light. We had been told by many people that we would experience racism in Serbia, as one example. Yet, we had no problems in Serbia. Despite seeing few other black people there, no one looked twice at Brandon. And even at a warehouse party we went to, he was the most popular person in the room. One never knows what kind of reception they will get. So don’t just go by what people tell you.

Brandon still experiences microaggressions in various ways. For example, when we are out at a restaurant, we tend to notice that many times servers will address me and not him. Often people will automatically assume I am paying for the check. And these these things happen, quite literally, all over the world.

For me, as we transitioned into the African leg of our big adventure, I was expecting to be on the receiving end of racism. And I felt I deserved it, simply because of the actions of my ancestors. Yet, native Africans were some of the nicest and most accommodating people where I was concerned. Despite all the horrors white people brought to the African continent (such as the British establishing concentration camps in Kenya after World War II), I never felt any animosity from them. To this day, in 40 countries traveled, I have never experienced a moment of racism directed at me. Tales of racist aggressions towards my pasty white self across 40 countries fills exactly zero percent of this blog. Let that sink in.

Traveling as a Gay Couple

Honestly, we were always more concerned about ‘traveling while gay” than we were traveling while interracial. While we do not actively display affection with each other in public, there is always something in the back of our mind questioning what people think or suspect. As we rent out people’s homes and apartments, does anyone question us using only one bed? This is just one among many questions that pop into your mind. While we consciously do not care, subconsciously, these thoughts exist.

I think one of the big questions the traveling LGBTQ+ community struggles with is whether they should go to countries where being gay is against the law. Many within the our community believe that they should not travel to countries not welcoming to gay people. Their explanation for this stems from a desire to not support regimes or governments that do not approve of our way of life. Brandon and I do not ascribe to this view. After all, gay people live everywhere, and traveling to these countries isn’t about supporting the governments, it is about supporting the people. We want to meet other gay people and show them that we support them in their struggles. We know the impacts we have made meeting gay people in Egypt, where you can go to jail for being gay, and how happy – overjoyed – they were to meet us and know there is hope for us in the world. Sometimes they are business owners and we support their businesses. You don’t travel to visit the President of a country; you travel to visit the people of the country, and the places. We have made lifelong friends in Egypt, Kenya, and Malaysia, all places where our communities face open oppression. We have donated to causes in these countries and voices support for movements at the forefront of human rights. We should be there.

Interestingly, it was in one of the most repressive countries against gay people, Egypt, that we were able to actually show public displays of affection. You see, in many conservative countries, there is no taboo against straight men showing affection. It was in these countries that we noticed men walking around holding hands, arm-in-arm, and being obviously affectionate. So, there we were, in Egypt, walking down the street holding hands, and no one looked twice at us. It was both scary and exhilarating. Who would imagine that in the countries you aren’t allowed to be gay in, you can walk around showing affection to your partner and no one cares, no one questions you. Yet, you can’t be open about it? It doesn’t make sense.

Now, living in Costa Rica, things are pretty chill for us. Not only do we live in a predominantly Afro-Caribbean community, but Costa Rica was the first country in Central America to legalize gay marriage. This is a stable democracy and the people here are so warm and welcoming. To be completely honest, Brandon and I feel more safe here then we would in our own country, the United States. Brandon has no fear of the police here. Still, that does not mean people here are not racist. You simply cannot get past racism and prejudiced behavior no matter where you go.

In the end, living abroad for nearly four years has not presented us with huge problems being interracial or gay, outside of some isolated instances and poor attitudes in certain places. And Brandon is so used to experiencing it that it is like water off a duck’s back for him. While it is something that is always in the back of our minds, we are grateful that we have had a largely positive travel experience, despite our race and sexuality. We hope that the world continues to progress in the direction of racial tolerance and equality and use Floppy Hat Adventures as a medium to project that hope. Glad to have you along with us. 🙂