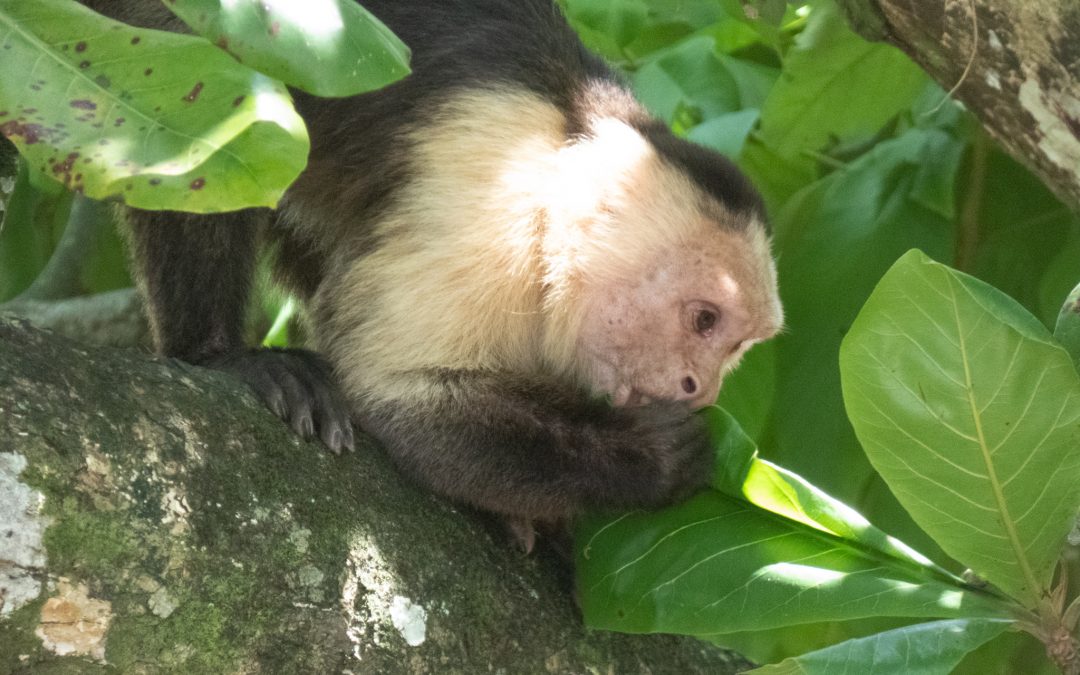 Lush green jungles. Pristine blue beaches. A huge diversity of flora and fauna. Welcome to Costa Rica. There is a reason why, after 2.5 years of travel and 29 countries, Brandon and I decided to settle here, in this place. Costa Rica is one of our favorite countries.

With only 0.6 percent of the world’s land mass – equivalent to the size of West Virginia – Costa Rica boasts 6 percent of the world’s biodiversity. It contains more species per square kilometre than any other country, over 500,000 in total. It’s a looong way away from West Virginia! We routinely wake up in the morning to the sound of Howler Monkeys and Great Green Macaws just outside our windows in the jungle. It is a nature lover’s dream!

Built on a solid democratic foundation, Costa Rica abolished its military half-a-century ago and redirected those funds into education and healthcare. As a result, Costa Rican citizens, or “Ticos” and “Ticas” as they are popularly referred to, are the most educated population in Central America. It is also the most stable and safe among its Central American neighbors, and its people are fiercely proud of it. Expect to see plenty of Costa Rican flags hanging outside of homes and over fences as you make your way around the country. The official country motto is “Pura Vida,” which means pure life in Spanish. The phrase has become a catch-all term in Costa Rican society. And it is accurate. For the life here, and the people and their country, are so very pure and beautiful.

A Quiet History in Ancient and Modern Times

There is a reason why the vibe of this country is so special. It has existed with itself, quietly, and peacefully, for a long time. Much to the surprise of no one, Christopher Columbus was the first European to land in Costa Rica, in 1502. Columbus and his entourage expected to find riches and gold in Costa Rica, hence the name, which means “Rich Coast” in Spanish. Yet, they found none. The land was a dense jungle and harsh by posh European standards. It was inhospitable and populated by indigenous tribes who, at the time, were unaligned with the waning Mayan and Incan empires of the time.

You see, for thousands of years the indigenous tribes of Costa Rica existed as a quiet backwater, long through pre-Colombian times. While the great Incan and Mayan empires to their north and south expanded through the centuries, the unaligned tribes of Costa Rica staked out their own quiet existence among the coasts and rich inland of the Continental Divide, practically undisturbed.

We want to make sure you know their names. These tribes included the:

Since the Costa Rican tribes of the 16th Century were so loosely organized, Spanish forces easily overcame them. Still, with the dense jungle of Costa Rica offering save haven, many melted away into the country’s interior. Today, Costa Rica’s indigenous tribes enjoy strong protections. Still, along with many native tribes throughout North and South America, Costa Rican indigenous tribes suffer from vastly reduced numbers and live at or below the poverty line.

Costa Rica would go on to be a part of Spain for over 300 years. Yet it existed in a kind of geopolitical vacuum. Bereft of gold, minerals, or other obvious riches, it was again a backwater for another few centuries, nearly forgotten about. Yet the far-away Westerners of the time were ignorant, because these lands and coasts were quite rich with nature’s bounty. Even more, the central valley, where the capital of San Jose is now located, offered rich soil. The magnificence of the land has contributed over the past 150 years to Costa Rica’s rise as a mass producer of coffee and chocolate and an influential grower and exporter of bananas, pineapple and other tropical fruits.

Costa Rica has maintained its status as a stable Democracy for half-a-century, beginning in 1948 when, after a civil war, the fledgling democracy abolished its military. The president of Costa Rica at the time, José Figueres, announced that the nation’s former military budget would be refocused specifically in healthcare, education, and environmental protection, which has held true to this day. Just imagine a concept like that in these modern times, when countries spend untold trillions on military equipment and war. To Brandon and I, this is one of the most attractive things about Costa Rica. Not having a military or a militarized society is the essence of a “pure life.” The vibe here is chill and there is a good reason for it.

Today, Costa Rica stakes itself out as a country with a strong health, social, and environmental safety net. It provides universal health care to its citizens and permanent residents and offers some of the best health care in Latin America. During the COVID-19 pandemic, Costa Rica has guaranteed social assistance and spent millions of dollars buttressing sectors badly battered through the pandemic. With its advanced healthcare system, Costa Rica is now pioneering a COVID-19 treatment, in-country, with its own resources. And in a sign of how people-forward this country is, it has pledged to offer this treatment to its neighbors at the earliest opportunity. Though cases are rising, Costa Rica’s mortality rate remains low. This is the picture of a country doing everything it can to manage multiple crises with limited resources.

The people are important, but so is the planet. And if there is one country that cares about its land, it is Costa Rica. Yet this wasn’t always the case. By the early 1980s, the destruction of two-thirds of the forests in Costa Rica had ravaged the land. Loggers ruled the roost and the habitats of many indigenous creatures had been destroyed. But then, following decades of decline, Costa Rica underwent a paradigm shift, and the forests would slowly begin to make a comeback. What happened? The simple answer is that Costa Rica began to realize the potential of its rich ecosystems and took a stand to protect them. When Brandon and I recently visited a farm in La Fortuna, the family explained to us how they had reforested their land. Reforested? Wow. Little did we know, we would hear more of this.

In 1996, lawmakers set up a system of payments for environmental services targeting poor, rural areas. While these measures were intended to reduce poverty, they were also meant to address deforestation. A National Forestry Fund was established to offer landowners per-acre financial incentives to conserve their land and practice reforestation. And this during a time of massive deforestation all over the world as national economies pillaged their land for resources. It is supported by foreign investments, loans, and taxes on fossil fuels and supports 18,000 jobs. This focus on safeguarding the natural lands has led to a revitalization of the Costa Rican interior. Successive governments have supported policies of reforestation, leading to a doubling of forest cover since the 80s. Today, you can’t drive anywhere in Costa Rica without seeing forest canopy.

Costa Rica leads the world in renewable energy adoption, with over 98% of the country’s energy coming from a mix of renewable sources. It has plans to phase out disposable plastics by 2021 and is working to develop an electric rail line in the capital city and outlying suburbs. Recently, Costa Rica became the first country in Central America to recognize same-sex marriage. Central America is a historically conservative region of the world, so this was a change that marked Costa Rica as a trailblazer. And while it is a strong reason why Brandon and I love this country so much, it is one of many. Pristine forests, diverse flora and fauna, world-leading biodiversity and clean, uncluttered sandy beaches on both coasts; a strong social net, great food and strong culture – and chill population. We could go on, as I am sure you could guess!

We feel blessed and privileged to call this special country home and, as it slowly opens back up to the world, we invite you to come and visit!